Movies produced in Bollywood, Maharashtra — and elsewhere in India — typically feature an item song performed by an item girl. An item song is defined in the dictionary as:

An item song or item number is a musical performance that has little do with the film in which it appears, but is presented mainly to showcase beautiful dancing women, to promote a song, or to lend marketability to a film. 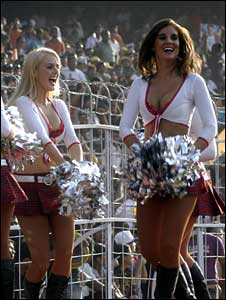 The Maharashtra government had said that it was considering a ban on cheerleaders in the DLF IPL matches in Mumbai. The objection on the cheerleaders was raised in the State Legislative Council by Maharashtra BJP president Nitin Gadkari, who is also a member of the House. Gadkari said it was degrading to women and should be banned.

Obscenity is in the eye of the beholder, but between the 2 pictures, if anything is degrading to women, it certainly is not the cheerleaders.

“We live in India where womanhood is worshipped. How can anything obscene like this be allowed?,” Siddharam Mehetre (interior minister, Maharashtra) told the Press Trust of India news agency.
“This thing is meant for foreigners and not for us. Mothers and daughters watch these matches on television. It does not look nice.”

Yes, we do worship women in India. Mothers indeed take their daughters to movies like Om-Shanti-Om where the female body is put up on a pedestal — literally. Will the hypocrisy ever end?